I’m a sola scriptura kind of gal, so I try not to include extrabiblical texts in my studies.  I do peek into Jewish expectation at times, as I believe that end times prophecy revolves around Israel and the Hebrew people.  Their expectations will play into how they respond to God’s call.  For that reason, we are going to briefly peek into a Kabbalistic Jewish custom today regarding the Feast of Pentecost.

The custom is known as the Tikkun Leil Shavuot.  The kabbalistic Jews stay up all night studying the Torah in preparation for the celebration of Shavuot (Pentecost).  Included in this tradition is the belief that the skies open up for a brief moment during the night.  They also believe that Shavuot represents the wedding of God, and stay up all night to “decorate the bride”.  Let’s examine some commentaries on this custom:

A kabbalistic custom emanating from the mystics in Safed (sixteenth century) is to stay up the whole (first) night of Shavuot studying Torah. The tikkun — a set order of study — was composed of selections from the Bible, rabbinic literature and even mystical literature such as the Zohar. In this fashion the kabbalists prepared for the momentous revelation of the following morning.

This practice of staying up all night is in stark contrast to that of the Israelites at Sinai, who according to tradition slept late into that morning and had to be awakened by Moses. In atonement for this, Jews nowadays stay awake all night. The sense of preparation for Sinai is heightened by a mystical tradition holding that the skies open up during this night for a brief instant. At that very moment, we are told, God will favorably answer any prayer. The kabbalists also regard Shavuot as the wedding of God and Israel and of God’s masculine and feminine parts. Therefore, we stay up all night to “decorate the bride.” While the kabbalists instituted other tikkunim (for the seventh day of Pesah and for Hoshana Rabbah), this is the only one widely observed.

And a second one:

Now children, listen to me: I’ll tell you something of my youth. Now your father is old, and if he let his beard grow as did Abraham, you’d see white hair in his beard. But I too was once a little boy who used to do the things children do. While the old men sat in the house of study preparing themselves for the time of the giving of the Torah the following morning, my friends and I would stand outside looking upward, hoping to catch the moment when the sky splits open and everything you ask for (even supernatural things!) is immediately given you by God — if you are worthy and you catch the right moment. In that case, why do I feel as though none of my wishes has ever been granted? Because I had so many things to ask for that before I decided what to wish first, sleep came upon me and I dozed off. When a man is young, his wishes are many; before he gets around to asking for anything, he is overcome by sleep. When a man is old, he has no desires if he asks for anything he asks for a little sleep.

From The Sign by S.Y. Agnon from A City in its Fullness (https://www.sefaria.org/sheets/36435)

Now, why do I include this mystical tradition in our study?  I include it because we actually are anticipating the skies rolling back as a scroll and the wedding of Christ!

The Sky Be Rolled Back As A Scroll

It Is Well with My Soul
Horatio G. Spafford

When peace, like a river, attendeth my way,
When sorrows like sea billows roll;
Whatever my lot, Thou hast taught me to say,
It is well, it is well with my soul.

Though Satan should buffet, though trials should come,
Let this blest assurance control,
That Christ hath regarded my helpless estate,
And hath shed His own blood for my soul.

My sin—oh, the bliss of this glorious thought!—
My sin, not in part but the whole,
Is nailed to the cross, and I bear it no more,
Praise the Lord, praise the Lord, O my soul!

For me, be it Christ, be it Christ hence to live:
If Jordan above me shall roll,
No pang shall be mine, for in death as in life
Thou wilt whisper Thy peace to my soul.

But, Lord, ’tis for Thee, for Thy coming we wait,
The sky, not the grave, is our goal;
Oh, trump of the angel! Oh, voice of the Lord!
Blessed hope, blessed rest of my soul!

And Lord, haste the day when the faith shall be sight,
The clouds be rolled back as a scroll;
The trump shall resound, and the Lord shall descend,
Even so, it is well with my soul.

If you’ve been reading through my website at all, you are likely aware that I clearly see the rapture of the church in Seals 5&6, pretribulation.  Let me briefly review for those of you who haven’t been following.  In part 3 of this study series on Pentecost, we reviewed Peter’s Pentecost Prophecy.  In it, he quoted a portion of Joel 2, which I believe defines for us the beginning and ending of the church age.  Peter ends his quotation of Joel 2 with this:

And I will show wonders in the heavens above
and signs on the earth below,
blood, and fire, and vapor of smoke;
the sun shall be turned to darkness
and the moon to blood,
before the day of the Lord comes, the great and magnificent day.
And it shall come to pass that everyone who calls upon the name of the Lord shall be saved.’  Acts 2:19-21 ESV

If Peter is telling us that the church age will end with the signs detailed in Acts 2:19-21, where do we find a match for this in scripture?  There is only one place:

When he opened the sixth seal, I looked, and behold, there was a great earthquake, and the sun became black as sackcloth, the full moon became like blood,  and the stars of the sky fell to the earth as the fig tree sheds its winter fruit when shaken by a gale.  The sky vanished like a scroll that is being rolled up, and every mountain and island was removed from its place.  Then the kings of the earth and the great ones and the generals and the rich and the powerful, and everyone, slave and free, hid themselves in the caves and among the rocks of the mountains, calling to the mountains and rocks, “Fall on us and hide us from the face of him who is seated on the throne, and from the wrath of the Lamb,  for the great day of their wrath has come, and who can stand?”  Revelation 6:12-17 ESV

When seal 6 is opened, the sky vanishes like a scroll that is being rolled up.  This is the human perception of what is happening in the earth’s atmosphere and the universe.  It seems that what is occurring here is that the Third Heaven (supernatural) is becoming visible and colliding with the First and Second Heavens (natural realm of atmosphere and space).  The entire sky appears opened, allowing visibility into heaven – people on earth try to hide from what they see, which presumably is God on His throne (or some bright and terrifying supernatural scene).  Note, it’s not a doorway or window that opens, it’s the entire sky – no pushing and shoving necessary, there will be plenty of room for everyone if this is the rapture 😉 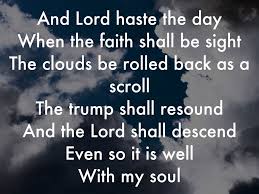 Seal 5 is a picture of the dead in Christ rising and being transformed into robed resurrection bodies, followed immediately by Seal 6 where the ones still alive and remaining are transformed. This process is described in Isaiah 26:

Your dead shall live; their bodies shall rise.
You who dwell in the dust, awake and sing for joy!
For your dew is a dew of light,
and the earth will give birth to the dead.

Come, my people, enter your chambers,
and shut your doors behind you;
hide yourselves for a little while
until the fury has passed by.
For behold, the Lord is coming out from his place
to punish the inhabitants of the earth for their iniquity,
and the earth will disclose the blood shed on it,
and will no more cover its slain.

The body of Christ, both dead and alive, will enter our rest in heaven as per Isaiah 26.  Meanwhile on earth, the number of martyrs will continue accumulating until their fullness is complete (Rev 6:11).  The souls of these martyrs accumulate on the sea of glass in heaven (Rev 15:2).

For more detailed analysis, I recommend these posts:

When the Sky Is Opened

There are several other occasions upon which the sky is opened, which confirm our suspicion that it is not the actual blue sky that opens but that another dimension (the spiritual one) is unveiled.  Let’s take a look at these:

In the thirtieth year, in the fourth month, on the fifth day of the month, as I was among the exiles by the Chebar canal, the heavens were opened, and I saw visions of God.  Ezekiel 1:1 ESV

And when Jesus was baptized, immediately he went up from the water, and behold, the heavens were opened to him, and he saw the Spirit of God descending like a dove and coming to rest on him; and behold, a voice from heaven said, “This is my beloved Son, with whom I am well pleased.”  Matthew 3:16-17 ESV (also, Mark 1:10, Luke 3:21)

And he said to him, “Truly, truly, I say to you, you will see heaven opened, and the angels of God ascending and descending on the Son of Man.”  John 1:51 ESV

…and saw the heavens opened and something like a great sheet descending, being let down by its four corners upon the earth.  Acts 10:11 ESV

After this I looked, and behold, a door standing open in heaven! And the first voice, which I had heard speaking to me like a trumpet, said, “Come up here, and I will show you what must take place after this.”  Revelation 4:1 ESV

Then I saw heaven opened, and behold, a white horse! The one sitting on it is called Faithful and True, and in righteousness he judges and makes war.  Revelation 19:11 ESV

Other uses of the word dianoigo, or to open fully, is used to describe eyes opening to recognize (Luke 24:31), opened understanding of the scriptures (Luke 24:32), and hearts opened (Acts 16:14).  What is being opened in these instances are the spiritual heavens and spiritual understanding.

We now need to further investigate the second part of the Jewish Kabbalistic tradition on Pentecost – The Decorating of the Bride!

Pentecost Part 16 – The Feast of Weddings and Wedding Suppers

Main Pentecost Study Menu: Everything You Need to Know About Pentecost, the Feast that Ties It All Together For The Church

The Noisy, Not-So-Secret Rapture of the Church

Braxton Hicks, Labor Pains, and the Time of the End