There actually is no such thing in Scripture as “The Tribulation”; generally people are referring to the “70th Week of Daniel” when they mention it.  There is certainly an upcoming time of wrath and judgment that I believe lasts 7 years.  What is generally referred to as the “Tribulation” actually encompasses several broad periods of time – the 70th Week of Daniel and the Day of the Lord.  These have distinct purposes, so let’s briefly examine and compare them!

The 70th Week of Daniel

The 70th Week of Daniel is 1260+1260 days long (7 360-day years).  This is why the “Tribulation” is called the “7-year Tribulation”.  However, nowhere is it mentioned that this “week of years” will be filled with “tribulation” specifically.  What Daniel states is that:

…to the end there shall be war. Desolations are decreed.  And he shall make a strong covenant with many for one week, and for half of the week he shall put an end to sacrifice and offering. And on the wing of abominations shall come one who makes desolate, until the decreed end is poured out on the desolator.”  (Daniel 9:26b-27 ESV)

The 70th week of Daniel begins at the confirming of a covenant with Israel.  This covenant likely results in the rebuilding of the Third Temple and the re-institution of an Old-Testament style sacrificial system.  We know this Temple and sacrifices are in place by the middle of the “week”, because at this midpoint the daily sacrifices are caused to cease.  It is for the last half of the week, or 3.5 years, that the antichrist will set up the “abominations” and will make “desolate”.

The first half of this “week”, 1260 days, will likely be relatively peaceful – at least for Israel.  There is no unusual “tribulation” mentioned.  Depending how satan’s deception of 2 Thessalonians 2 unfolds, the antichrist will be rising to power during this time and may proclaim himself to be the Jewish “messiah”.  He will be conquering Israel’s enemies, so there may be “tribulation” against other religions, like Islam.

While there may not be specified “tribulation” during this first half of Daniel’s 70th week, remember that “desolations are decreed” until the end, as is war.  So it’s not all going to be cherries and cupcakes.

It is the latter 3.5 years that the time of “greatest tribulation” occurs (Matthew 24).  Thus, the “Great Tribulation” coincides with the last half of the 70th Week of Daniel.

The purpose of the 70th Week of Daniel is for national and ethnic Israel, particularly Jerusalem, and involves:

So we have found out that the 70th week of Daniel likely has some regular tribulation for half of it, just as the entire church age is filled with “tribulation”.  Tribulation is part of life in this fallen world, and opposing the world and aligning with Christ brings additional tribulation.  We know that war and desolations are decreed until the very end, so these are to be expected to continue.  However, starting halfway through the week, is the Great Tribulation.  Satan’s wrath can definitely be seen in the Great Tribulation part, even if it can’t be pinpointed to the first half.  There is no mention of God’s wrath in the 70th week.  So, no current believers are specifically promised to be spared from the 70th Week of Daniel.

Daniel’s 70th week, and the Great Tribulation, ends when the antichrist’s rule ends, which is through the Second Coming of Jesus Christ.

Further information on Daniel’s 70th week and what it includes can be found here:

The Day of the Lord

The Day of the Lord is an intense period of God’s intervention and judgment (wrath) on earth.  God will rise up to protect Israel from certain destruction in order that all prophecy can be fulfilled; this begins the Day of the Lord.

The Day of the Lord cannot come until all the following has occurred:

Ezekiel chapter 38-39 details a future war of “Gog and Magog”, in which God will rise up in wrath at the time of His choosing.  God arranges the war at an appointed time by putting thought’s in “Gog’s” head, and “putting hooks into [his] jaws”.  God then “drives” and “leads” him to fulfill his purposes.

During the Day of the Lord:

The entire Day of the Lord is marked by God’s wrath, which will come off and on in a series of 14 specific judgments detailed in the 7 Trumpets and the 7 Bowls.  This wrath is not defined as “tribulation”, although there will certainly be suffering because of it.  It could certainly be called anguish, tribulation, and sorrows, but it is not specifically referred to as such in scripture.

Believers are promised to be spared from God’s wrath, and thus the entire Day of the Lord.

Like a pregnant woman who writhes and cries out in her pangs when she is near to giving birth, so were we because of you, O Lord; we were pregnant, we writhed, but we have given birth to wind. We have accomplished no deliverance in the earth, and the inhabitants of the world have not fallen. Your dead shall live; their bodies shall rise. You who dwell in the dust, awake and sing for joy! For your dew is a dew of light, and the earth will give birth to the dead.  Come, my people, enter your chambers, and shut your doors behind you; hide yourselves for a little while until the fury has passed by. For behold, the Lord is coming out from his place to punish the inhabitants of the earth for their iniquity, and the earth will disclose the blood shed on it, and will no more cover its slain.   (Isaiah 26:17-21 ESV)

This passage in Isaiah 26 is particularly interesting in that it connects the dead rising (resurrection), God’s people entering their chambers to hide (rapture), and God coming out of His silence to punish the earth (beginning of wrath).

More on the Day of the Lord can specifically be found in these posts:

Overlapping Daniel’s 70th Week with the Day of the Lord

Because God’s wrath begins either at or before the 70th Week of Daniel (“The Tribulation”), believers will be spared from “The Entire Tribulation”.

The Rapture of the Church – Our Blessed Hope

The Day of the Lord

The Woman Flees To A Place Prepared 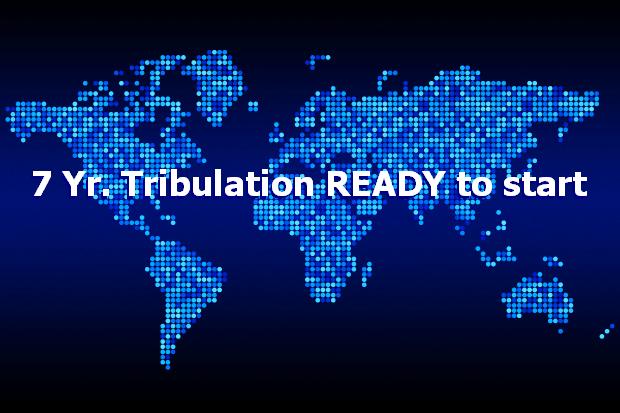