“And a great sign appeared in heaven: a woman clothed with the sun, with the moon under her feet, and on her head a crown of twelve stars. She was pregnant and was crying out in birth pains and the agony of giving birth.”

I believe that the Great Sign in the Sun, Moon and Stars on September 23, 2017 literally fulfilled the vision John was given in Revelation 12:1-2.  This is perhaps the most exciting prophetic sign our generation has seen (apart from Israel’s rebirth!).

Israel’s rebirth seems to have fulfilled the sign of the budding of the Fig Tree, and thus, the starting of the so-called Terminal Generation– the generation that will not pass away until Jesus returns.  The Revelation 12 sign seems to be right on time to signal the imminent rapture of the church and the beginning of the Time of Jacob’s Trouble.  This time of trouble will bring about the reconciliation of Israel to God, through a period of severe testing.

When I first stumbled across the Revelation 12 sign, I searched in scripture for all “great sign” passages.  It turns out there are only two:

There will be great earthquakes, and in various places famines and pestilences. And there will be terrors and great [Strong’s 3173] signs [Strong’s 4592] from heaven.  (Luke 21:11 ESV)

“And a great [Strong’s 3173] sign [Strong’s 4592] appeared in heaven: a woman clothed with the sun, with the moon under her feet, and on her head a crown of twelve stars. She was pregnant and was crying out in birth pains and the agony of giving birth.” (Revelation 12: 1-2 ESV)

Luke is describing the beginning of the birth pains in that passage, and states that when these things begin to take place, straighten up and raise your heads, because your redemption is drawing near. (Luke 21:28 ESV).

The heavens declare the glory of God,
and the sky above proclaims his handiwork.
Day to day pours out speech,
and night to night reveals knowledge.
There is no speech, nor are there words,
whose voice is not heard.
Their voice goes out through all the earth,
and their words to the end of the world.
In them he has set a tent for the sun,
which comes out like a bridegroom leaving his chamber,
and, like a strong man, runs its course with joy.
Its rising is from the end of the heavens,
and its circuit to the end of them,
and there is nothing hidden from its heat.

God placed the heavenly bodies deliberately with specific orientation, alignment, and order.  God wrote the story of salvation in the stars via the Mazzaroth (which satan corrupted into what we know as astrology).  Because other watchmen have detailed this sign so well, I’m going to just summarize the best articles I have found and point you towards further research if you are interested.  The information on this sign has literally exploded all over the internet! 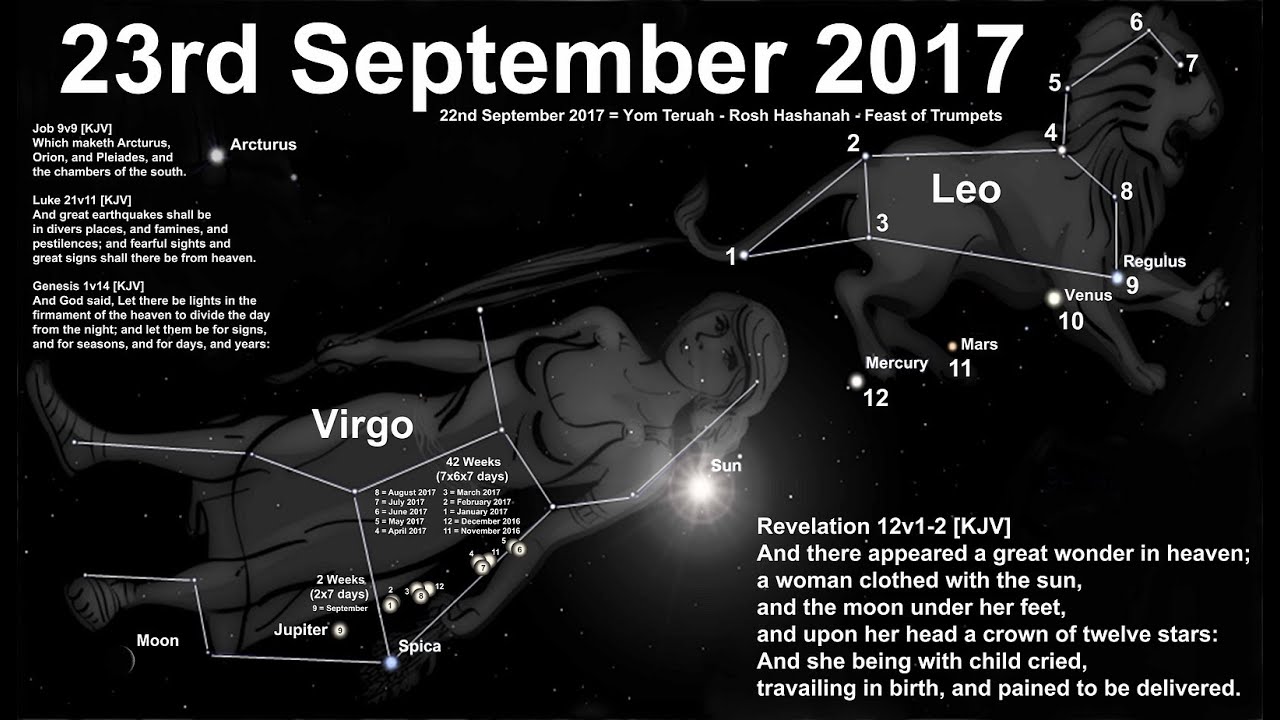 The Revelation 12 sign was first discovered by Luis Vega in 2008 using astronomy software.  This discovery came on the heels of Rick Larson’s 2007 documentary entitled The Star of Bethlehem, which used astronomy software to locate the stellar sign heralding Jesus’ first coming.  The Star of Bethlehem documentary sparked a new interest in looking for prophetic signs in the heavens.  Although there were several prophetic watchmen who looked into the Revelation 12 sign before him, Scottie Clarke has become somewhat of a poster child for this great sign over the last 6 years.  His discussions can be viewed on his YouTube channel –  eternalrhythymflow.  Many other Bible prophecy watchmen have since verified the sign in Stellarium and other astronomy programs as well.  Today, thousands (if not tens or hundreds of thousands) of people have verified the Revelation 12 sign which will occur on September 23, 2017.  Rev12Blogspot has written up detailed instructions on how to view it for yourself, if you would like to check it out.

For a detailed discussion on the components of the Revelation 12 Sign and common questions and answers, I suggest you go HERE (unsealed.org).

This PDF Document is a detailed discussion on the sign and I highly recommend printing or saving it:  Revelation 12 Sign of September 23, 2017.

The linked article gives a summary of the astronomical alignment that will literally come into the exact position described in Revelation 12:1-2 on September 23, 2017.  This sign is seen from the perspective of Jerusalem, Israel, which is at the epicenter of all Biblical prophecy.

(Chart reproduced from Unsealed – see HERE for source, which also gives a description of the Criteria used in the chart.)

I’m not sure who to give original credit to for these alignment odds, but sharing was permitted:

Some people have said that the alignment is not a big deal. I decided to take some time to do the math. Let’s calculate some odds shall we? I’ve been conservative in my estimates so please correct me if I’m wrong.

I used the following links to help me:
https://skydoginstitute.com/faq/planetary-movements/
https://www.universetoday.com/23849/jupiter-retrograde/

The odds are about 1 in a HUNDRED BILLION.

You see folks, in fact this is a VERY RARE alignment. It’s about the CONVERGENCE of all of the signs that have been given to us including the blood moons, the eclipse, the special dates and so on.    (author unknown)

The Sabbath of Return

The Great Sign appeared over Israel on September 23, 2017, which also happened to be a Saturday, the Sabbath day.  It wasn’t just any Sabbath, however – it was the Sabbath of Return.   Shabbat Shuvah is the Sabbath that occurs between Rosh Hashanah and Yom Kippur and marks a time of reflection leading up to the Day of Atonement (Yom Kippur).  On it, the Jews read Hosea 14:2 “Shuva Yisrael – Return, O Israel, unto the LORD your God!”  The Sabbath of Return occurs every year as part of the celebration of the Fall Feasts; however, this year it seems significantly punctuated by the Great Sign.

The great question, assuming Stellarium and all these watchmen are correct, is what is the significance of this great sign?  Is the sign’s appearance related to the imminent snatching of the child – the Church?  Does it herald the Time of Jacob’s Trouble about to begin for Israel (the 70th Week of Daniel)?  I believe the Revelation 12 sign serves as a warning that our exit as the church is near, and that the age of grace is about to close.  The author (Greg) says it well on alittlestrength.com:

I believe the REV12 sign—a sign that will be fulfilled this September—is nothing less than the Church’s exit sign, indicating to those with ears to hear that our “exit” is coming up just ahead. I say that because just as with real exit signs on the highway, I do not believe we will ever have revelation knowledge of anything in Scripture that pins the Rapture to a certain date. In other words, the actual exit itself isn’t right there at the sign—exit signs don’t work that way. They give you some advance warning, just as many of God’s signs do. An exit sign gives you a heads up that you’re just about there and gives you sufficient time to get into the right lane and prepare to take your exit when you come to it.  (SOURCE: ALittleStrength – the Exit Sign)

Will the exit be before the sign?  Will it be on the day of the sign? Will it be shortly after (days, weeks, months, one to several years)?  This remains to be seen.

It is God’s will that we all live in a state of alert spiritual readiness.  This demonstrates the beauty of Biblical prophecy!  It is alive!  Each generation can use it for profit, but it becomes more and more meaningful as it unfolds.

Please click for a detailed defense of each postulated difficulty of the September 23 alignment:

The Revelation 12 Sign Has Never Successfully Been Debunked… Despite Numerous Attempts, including:

The Child in Revelation 12 is Definitively the Church:

Not a New Discovery, Early Church Fathers also Believed the Church Is the Child in Revelation 12:5:

Conservative Scholars Agree: The Male Child is the Church

5 Theologians on the Child of Revelation 12

Ancient Monuments pointing to the Fall 2017 alignments in the sun, moon, and stars

Labor and Birth References in the Bible:

Braxton Hicks, Labor Pains, and the Time of the End
The Woman in Labor