God’s revelation and dealings with humanity can be broadly separated into “ages”.  This is the basis for Dispensational Theology.  It’s not perfect, but it helps us grasp how God has progressively revealed Himself and His redemption plan to humanity.  Dispensational theology is the most common method of Bible prophecy interpretation in evangelical Christian circles.  It is the only view which explains the literal rebirth of modern-day Israel and the aliyah, or regathering, of Jews that we can observe and track.  It explains the prophetic line up of nations and wars we can watch in the headlines.  It explains the current social and political climate.  It is the method most consistent with a literal, cultural, historical, contextual study of scripture.

Dispensational theology sees the Church and Israel as distinct entities, and understands that God has separate plans for each.

Dispensationalism has two primary distinctives: 1) a consistently literal interpretation of Scripture, especially Bible prophecy, and 2) a view of the uniqueness of Israel as separate from the Church in God’s program. 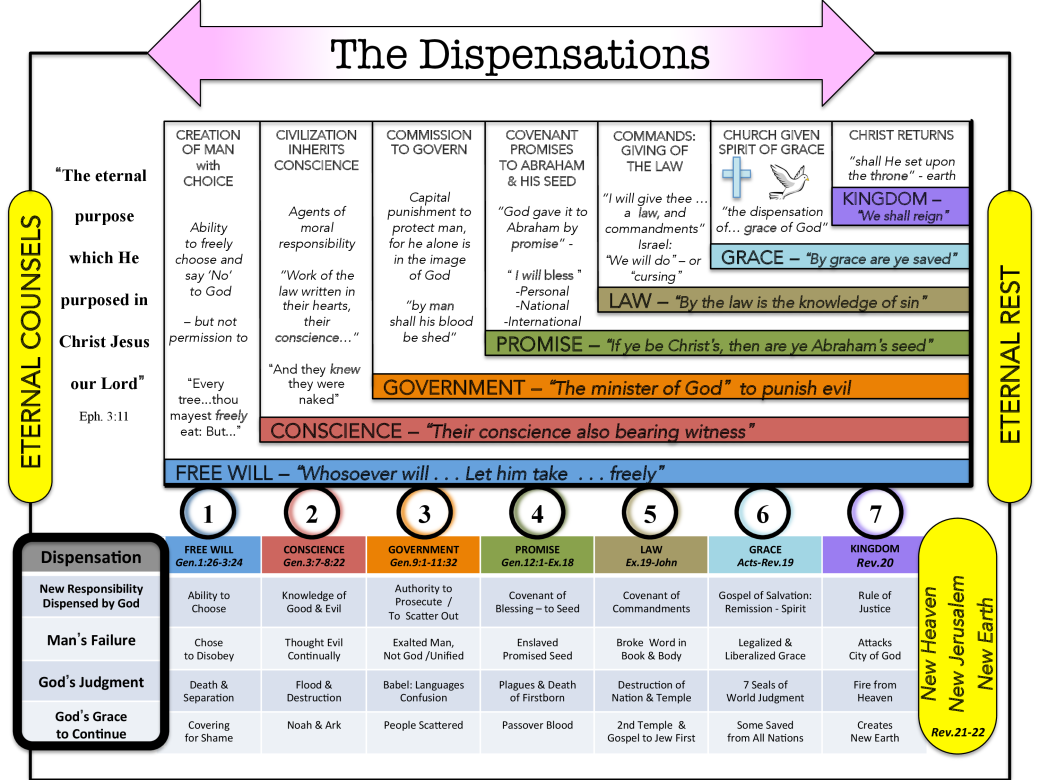 I’m not going to re-invent the wheel here, so I will let Gotquestions explain the seven dispensations in more detail:

The first dispensation is called the Dispensation of Innocence (Genesis 1:28-30 and 2:15-17). This dispensation covered the period of Adam and Eve in the Garden of Eden. In this dispensation God’s commands were to (1) replenish the earth with children, (2) subdue the earth, (3) have dominion over the animals, (4) care for the garden, and (5) abstain from eating the fruit from the tree of knowledge of good and evil. God warned of the punishment of physical and spiritual death for disobedience. This dispensation was short-lived and was brought to an end by Adam and Eve’s disobedience in eating the forbidden fruit and their expulsion from the garden.

The second dispensation is called the Dispensation of Conscience, and it lasted about 1,656 years from the time of Adam and Eve’s eviction from the garden until the flood (Genesis 3:8–8:22). This dispensation demonstrates what mankind will do if left to his own will and conscience, which have been tainted by the inherited sin nature. The five major aspects of this dispensation are 1) a curse on the serpent, 2) a change in womanhood and childbearing, 3) a curse on nature, 4) the imposing of difficult work on mankind to produce food, and 5) the promise of Christ as the seed who will bruise the serpent’s head (Satan).

The third dispensation is the Dispensation of Human Government, which began in Genesis 8. God had destroyed life on earth with a flood, saving just one family to restart the human race. God made the following promises and commands to Noah and his family:

1. God will not curse the earth again.
2. Noah and family are to replenish the earth with people.
3. They shall have dominion over the animal creation.
4. They are allowed to eat meat.
5. The law of capital punishment is established.
6. There never will be another worldwide flood.
7. The sign of God’s promise will be the rainbow.

Noah’s descendants did not scatter and fill the earth as God had commanded, thus failing in their responsibility in this dispensation. About 325 years after the flood, the earth’s inhabitants began building a tower, a great monument to their solidarity and pride (Genesis 11:7-9). God brought the construction to a halt, creating different languages and enforcing His command to fill the earth. The result was the rise of different nations and cultures. From that point on, human governments have been a reality.

The fourth dispensation, called the Dispensation of Promise, started with the call of Abraham, continued through the lives of the patriarchs, and ended with the Exodus of the Jewish people from Egypt, a period of about 430 years. During this dispensation God developed a great nation that He had chosen as His people (Genesis 12:1–Exodus 19:25).

The basic promise during the Dispensation of Promise was the Abrahamic Covenant. Here are some of the key points of that unconditional covenant:

1. From Abraham would come a great nation that God would bless with natural and spiritual prosperity.
2. God would make Abraham’s name great.
3. God would bless those that blessed Abraham’s descendants and curse those that cursed them.
4. In Abraham all the families of the earth will be blessed. This is fulfilled in Jesus Christ and His work of salvation.
5. The sign of the covenant is circumcision.
6. This covenant, which was repeated to Isaac and Jacob, is confined to the Hebrew people and the 12 tribes of Israel.

The fifth dispensation is called the Dispensation of Law. It lasted almost 1,500 years, from the Exodus until it was suspended after Jesus Christ’s death. This dispensation will continue during the Millennium, with some modifications. During the Dispensation of Law, God dealt specifically with the Jewish nation through the Mosaic Covenant, or the Law, found in Exodus 19–23. The dispensation involved temple worship directed by priests, with further direction spoken through God’s mouthpieces, the prophets. Eventually, due to the people’s disobedience to the covenant, the tribes of Israel lost the Promised Land and were subjected to bondage.

The sixth dispensation, the one in which we now live, is the Dispensation of Grace. It began with the New Covenant in Christ’s blood (Luke 22:20). This “Age of Grace” or “Church Age” occurs between the 69th and 70th week of Daniel 9:24. It starts with the coming of the Spirit on the Day of Pentecost and ends with the Rapture of the church (1 Thessalonians 4). This dispensation is worldwide and includes both Jews and the Gentiles. Man’s responsibility during the Dispensation of Grace is to believe in Jesus, the Son of God (John 3:18). In this dispensation the Holy Spirit indwells believers as the Comforter (John 14:16-26). This dispensation has lasted for almost 2,000 years, and no one knows when it will end. We do know that it will end with the Rapture of all born-again believers from the earth to go to heaven with Christ. Following the Rapture will be the judgments of God lasting for seven years.

The seventh dispensation is called the Millennial Kingdom of Christ and will last for 1,000 years as Christ Himself rules on earth. This Kingdom will fulfill the prophecy to the Jewish nation that Christ will return and be their King. The only people allowed to enter the Kingdom are the born-again believers from the Age of Grace and righteous survivors of the seven years of tribulation. No unsaved person is allowed access into this kingdom. Satan is bound during the 1,000 years. This period ends with the final judgment (Revelation 20:11-14). The old world is destroyed by fire, and the New Heaven and New Earth of Revelation 21 and 22 will begin.

We are currently in the 6th dispensation, the one of Grace.  This is commonly called the “Church Age”.  This age will end (soon!) and Jesus will usher in His millennial kingdom.  The dispensational view agrees well with the 7000 Years Appointed to Humanity.

The 7-year period of wrath or tribulation, consisting of the 70th Week of Daniel / The Day of the Lord, isn’t part of the Age of Grace, nor is it part of the Millennial Kingdom.  Some view it as the completion of the Dispensation of Law, which was paused for the church age.  The difference is that Jesus *has* already fulfilled the Law, so I tend to view the 70th week as being a separate dispensational entity.  The sacrifices that occur during the tribulation (and also in the Millennial Kingdom) won’t atone for sin – that price has been paid by the Lamb of God.

It is this relatively short period that is the focus of much Bible Prophecy.  While it is short, it is incredibly significant.  We will spend much time on this “mini-dispensation” in the coming lessons!  Within the dispensational interpretation method, there are different rapture timing positions, and it is these we will dive into next.

I believe the dispensational view is most consistent with a literal, cultural, historical, and contextual study of scripture.  Israel’s rebirth as a nation in 1948, after almost 2000 years of not being a nation, would seem to strongly support the view that God still has plans for her.  I encourage you to explore each of the positions on the church and Israel for yourself, to see if you agree with me!

This lesson series is a brief walk through the studies I have undertaken to get to my current understanding of End Times prophecy.  This isn’t meant to be all-inclusive so I provide links for you to explore further!  What I post here is my best insight from Scripture, but I’m only human 🙂  Thus, I urge you to search the Scripture for yourself to see if these things are so!

What Are the 7 Dispensations?  (GraceThruFaith)

What is Dispensationalism?  (CARM)

What is Dispensational Premillennialism?  (Gotquestions)

What is the dispensation of Innocence? (Gotquestions)

What is the dispensation of Conscience?  (Gotquestions)

What is the dispensation of Human Government? (Gotquestions)

What is the dispensation of Promise? (Gotquestions)

What is the dispensation of Law? (Gotquestions)

What is the dispensation of Grace? (Gotquestions)

What is the dispensation of the Millennial Kingdom? (Gotquestions)

What is Mid-Acts Dispensationalism?  (Gotquestions)

What is Progressive Dispensationalism?  (Gotquestions)

Prophecies Fulfilled by Jesus at His First Coming

How to Interpret the Bible – Grace Thru Faith 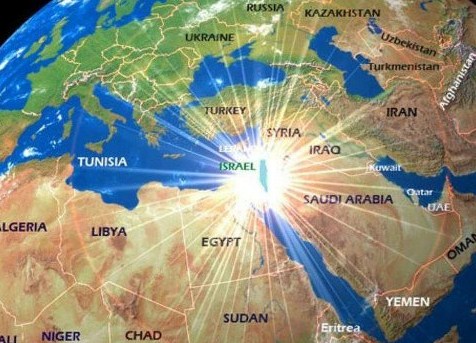