Revelation chapter 20 introduces us to what is known as the Millennium, or the Millennial Kingdom:

Then I saw an angel coming down from heaven, holding in his hand the key to the bottomless pit and a great chain.  And he seized the dragon, that ancient serpent, who is the devil and Satan, and bound him for a thousand years,  and threw him into the pit, and shut it and sealed it over him, so that he might not deceive the nations any longer, until the thousand years were ended. After that he must be released for a little while.

Then I saw thrones, and seated on them were those to whom the authority to judge was committed. Also I saw the souls of those who had been beheaded for the testimony of Jesus and for the word of God, and those who had not worshiped the beast or its image and had not received its mark on their foreheads or their hands. They came to life and reigned with Christ for a thousand years.  The rest of the dead did not come to life until the thousand years were ended. This is the first resurrection.  Blessed and holy is the one who shares in the first resurrection! Over such the second death has no power, but they will be priests of God and of Christ, and they will reign with him for a thousand years.

And when the thousand years are ended, Satan will be released from his prison and will come out to deceive the nations that are at the four corners of the earth, Gog and Magog, to gather them for battle; their number is like the sand of the sea.  And they marched up over the broad plain of the earth and surrounded the camp of the saints and the beloved city, but fire came down from heaven and consumed them, and the devil who had deceived them was thrown into the lake of fire and sulfur where the beast and the false prophet were, and they will be tormented day and night forever and ever.

This chapter specifically mentions a “thousand year” period six times in seven verses.  From Lesson 2, a discussion of Literalism versus Symbolism in Revelation, I understand that this 1000 years is literal.  There are, however, different interpretations of when this “thousand year” period occurs in relation to where we are now.

These views are a little confusing so I’ve found a handy chart to help us out.  The triangle indicates where we are: 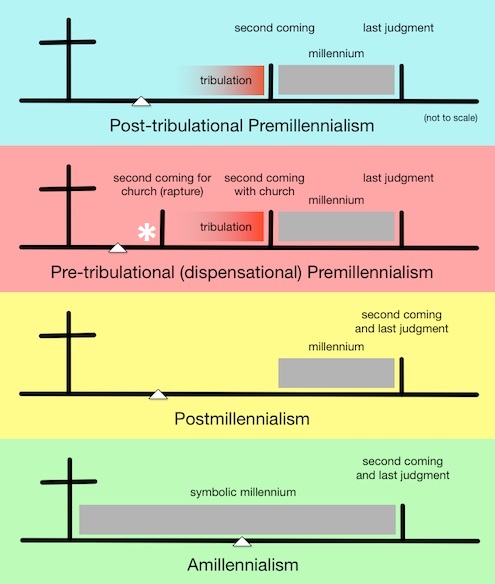 All of the views agree that Jesus will return physically, and that only believers will be saved.  They are all futurist, in that all agree that the second coming of Christ and the last judgment are yet to come.  We see the differences in the details, and will discuss these next!

This view states that Jesus will return AFTER a literal 7-year period of tribulation, BEFORE the literal Millennial Kingdom.  The rapture of the church and the second coming of Christ are seen as one and the same event.  This is the view of post-tribulation rapture adherents.  Thus, followers of Christ (the church) will endure the tribulation period and its’ associated wrath and persecution.  Jesus will return after this tribulation period and reign for 1000 years.  The state of Israel is seen as irrelevant.

This view states that Jesus will return AFTER a literal 7-year period of tribulation, BEFORE the literal Millennial Kingdom.  The rapture of the church and the second coming of Christ are seen as two separate events.  Within this view, there are different rapture timing suggestions (pre-tribulation, mid-tribulation, pre-wrath).  Believers will be spared from the wrath of God through the “rapture”, but this wrath is defined differently in the different rapture views.  The church is either spared from the whole or a part of the 7-year tribulation.  Jesus will return after the tribulation period ends and reign for 1000 years.  This is a popular view in Dispensational denominations.  The state of Israel is seen as significant to end times prophecy.

This view states that Jesus will return AFTER the millennium.  The rapture of the church and the second coming of Christ are seen as the same event occurring after the millennium.  This view does not believe in a literal 7-year tribulation.  Instead, tribulation involves the struggle between good and evil for the entire church age, with no separate time of worse persecution defined.  This view does not believe in a literal 1000-year millennium.  Instead, it refers to a time of peace once the gospel has been preached to all the world.  This is a popular view in Charismatic / Pentecostal denominations and is associated with Replacement Theology / Dominionism.  The state of Israel is seen as irrelevant.

This view states that Satan was bound at the time of Jesus’ death and resurrection.  Jesus could return at any time, there is no detailed time frame given.  The rapture of the church and the second coming of Christ are seen as the same event.  This view does not subscribe to a literal 7-year period of tribulation, but sees the entire church age as involving persecution and conflict.  Amillennialism also does not believe in a literal 1000-year millennium, but sees Christ’s kingdom rule as within the hearts of believers.  This is also a popular view in Charismatic / Pentecostal denominations and is associated with Replacement Theology / Dominionism.  The state of Israel is seen as irrelevant.

I believe in pretribulation (dispensational) premillennialism.  I believe this view is most consistent with a literal, cultural, historical, and contextual scripture study.  I encourage you to explore each of the millennial positions for yourself, to see if you agree with me!

This lesson series is a brief walk through the studies I have undertaken to get to my current understanding of End Times prophecy.  This isn’t meant to be all-inclusive so I provide links for you to explore further!  What I post here is my best insight from Scripture, but I’m only human 🙂  Thus, I urge you to search the Scripture for yourself to see if these things are so!

Life on Earth in the Millennium (GraceThruFaith)

What is Amillennialism? (Gotquestions)

What is Amillennialism?  (RaptureReady)

What is Premillennialism?  (Gotquestions)

What is Historic Premillennialism?  (Gotquestions)

What is Dispensational Premillennialism?  (Gotquestions)

What is Postmillennialism?  (Gotquestions)

What is Postmillennialism? (RaptureReady)

Animal Sacrifice in the Millennium (GraceThruFaith)

The Church Against the Rapture (GraceThruFaith)

How to Interpret the Bible – Grace Thru Faith