Parenting is one of the most difficult, and most rewarding, adventures that there is.  God has given these blessings into my life, and I heavily feel the responsibility for shepherding their hearts.  These are eternal beings, and how I raise them has a huge influence on how and where they will spend eternity.  I do not take this lightly.

Train up a child in the way he should go; even when he is old he will not depart from it.  (Proverbs 22:6 ESV)

While I believe that those under a certain level of comprehension are not held accountable for their sins, it is impossible for me to judge what that understanding level is and whether someone has reached it or not.  It is God, and God alone, who can accurately judge the heart.

I was once alive apart from the law, but when the commandment came, sin came alive and I died.   (Romans 7:9 ESV)

It is wise to teach young children about the simple truth of the Gospel (good news) of Jesus Christ.   Typical children can often grasp the essential concepts around the age of 4-5, although knowledge of God comes easily much earlier.  Children are very open to the spiritual realm.

It’s tempting to try to make the gospel into more, or less, than what it is.  Salvation begins and ends with Jesus (Hebrews 12:2 ESV).

When my daughter was four, this is how I walked her through the gospel:

1.  “Have you ever done mean choices or wrong things?”

“Yes!!!” she said.  What child doesn’t know they have done a “bad thing” sometimes, especially if they have siblings!  We, as parents, let children know when they have broken our rules.

I explained that God has also given people rules that He wants us to follow.  He has written His rules inside our hearts so that we know what is wrong or “bad”.  We know when we do bad things, because we try to sneak, or hide, or lie about it.  Even if we try very hard to do good choices, everyone does wrong things sometimes.  Even grownups.

“Yes!” she said.  Now while I do try to practice grace-based parenting, we do have rules and there are consequences for breaking them.

I explained that God is perfect in every way; He never does anything wrong.  He can’t have anyone who has ever done a bad thing come near Him or live with Him in heaven.  But that makes Him very sad, because He loves us so very much.

3.  “Do you want God to help you stop doing mean choices?”

“Yes!!” she said.  Children want to do good choices.  Their emotions, and lack of self-control, often hijack them.  We are incapable of breaking the power of “sin” over ourselves.  We need supernatural help…  But first we have to want to change.

I explained that God can help us choose kind choices if we ask for His help.

4.  “God wants you so much in His family with Him forever, that He came here Himself to fix things better.  God came here as Jesus, and was born as a baby person but He was also God.  He did no wrong choices at all, not even while He was growing up.  Then, when He was big, He told lots of people how much He loved them.  He did many amazing things like healing sick people, and even making dead people come alive again.  People were jealous of Him, and they were so mad that He said He was God that they even killed Him.  But when He died, He didn’t stay dead.  He came alive again.  He said that anyone who believed He was God and that He died and didn’t stay dead could go to heaven and be with Him forever when they die.  Do you understand that?”

“Yes!” she said.  At this point she also said “I hope I get to go to heaven when I’m still a children!”  She has actually said this before, and it kind of freaks me out – but she is super excited to go to heaven to meet God someday.  This was the part I really had no idea how to talk with her about, but she seemed to comprehend.

I explained that people have to die because of wrong choices.  If we believe what Jesus says and choose to follow Him, we get to go be with Him in heaven forever.  If we don’t believe what Jesus says, and don’t want to follow Him, then we have to go to the Lake of Fire when we die.  (Yes…I did mention this… I don’t personally see a way around it when fully laying out the salvation plan.  However, we’ve read Bible stories since she was 1 year old so this was not a new concept for her.)

5.  “When Jesus died, His blood became an eraser for wrong things.  He can erase all the wrong things you have thought, said, and done, if you ask Him to.  Do you want to follow Jesus and have Him erase your wrong choices?”

“Yes!!” she said.  It is so easy for young children to have simple faith.

Jesus said, “Let the little children come to me and do not hinder them, for to such belongs the kingdom of heaven.” (Matthew 19:14 ESV)

I told her that if she asks Jesus to forgive her from everything she has thought, said, and done that didn’t please Him, that He will.  I told her that if she believes in Jesus, and never stops believing in Him, that she is part of His family.  Jesus will hold onto her and never let her go.  She will get a new body and go to heaven someday (she has some physical challenges and is looking forward to a new body that works perfectly).

And there you have it.  Faith like a child.  It really is that simple.  No wonder Jesus said “Truly I tell you, unless you change and become like little children, you will never enter the kingdom of heaven.”  (Matthew 18:3 ESV)

** I HIGHLY recommend the book The Lamb by John Cross for leading your 4-10 year old child through the gospel message!** 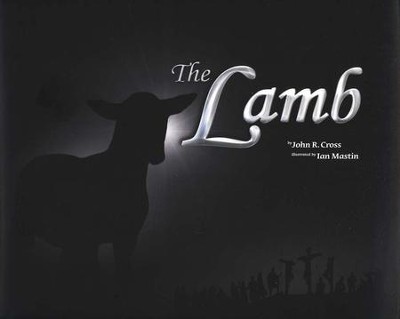