Then I heard a loud voice from the temple telling the seven angels, “Go and pour out on the earth the seven bowls of the wrath of God.” So the first angel went and poured out his bowl on the earth, and harmful and painful sores came upon the people who bore the mark of the beast and worshiped its image. The second angel poured out his bowl into the sea, and it became like the blood of a corpse, and every living thing died that was in the sea. The third angel poured out his bowl into the rivers and the springs of water, and they became blood.  And I heard the angel in charge of the waters say, “Just are you, O Holy One, who is and who was, for you brought these judgments. For they have shed the blood of saints and prophets, and you have given them blood to drink. It is what they deserve!”

And I heard the altar saying, “Yes, Lord God the Almighty,true and just are your judgments!” The fourth angel poured out his bowl on the sun, and it was allowed to scorch people with fire. They were scorched by the fierce heat, and they cursed the name of God who had power over these plagues. They did not repent and give him glory. The fifth angel poured out his bowl on the throne of the beast, and its kingdom was plunged into darkness. People gnawed their tongues in anguish  and cursed the God of heaven for their pain and sores. They did not repent of their deeds. The sixth angel poured out his bowl on the great river Euphrates, and its water was dried up, to prepare the way for the kings from the east.  And I saw, coming out of the mouth of the dragon and out of the mouth of the beast and out of the mouth of the false prophet, three unclean spirits like frogs.  For they are demonic spirits, performing signs, who go abroad to the kings of the whole world, to assemble them for battle on the great day of God the Almighty.  (“Behold, I am coming like a thief! Blessed is the one who stays awake, keeping his garments on, that he may not go about naked and be seen exposed!”)  And they assembled them at the place that in Hebrew is called Armageddon.

The seventh angel poured out his bowl into the air, and a loud voice came out of the temple, from the throne, saying, “It is done!”  And there were flashes of lightning, rumblings, peals of thunder, and a great earthquake such as there had never been since man was on the earth, so great was that earthquake.  The great city was split into three parts, and the cities of the nations fell, and God remembered Babylon the great, to make her drain the cup of the wine of the fury of his wrath. And every island fled away, and no mountains were to be found. And great hailstones, about one hundred pounds each, fell from heaven on people; and they cursed God for the plague of the hail, because the plague was so severe.

Revelation chapter 15 introduces us to the 7 angels carrying the 7 bowls of God’s final wrath.  John describes them as a great and amazing sign – “Then I saw another sign in heaven, great and amazing, seven angels with seven plagues, which are the last, for with them the wrath of God is finished.” (Rev 15:1 ESV).  Normally I would read this at face value, that the great and amazing sign John sees is the angels holding the plagues.  However, I am reminded of the “great sign” of Revelation 12:1-2 and “another sign” of Revelation 12:3-4 that we have discussed elsewhere.  I am not personally watching in the heavens (Stellarium) to try to discern what this might be, but I do make note of the language here in case future watchmen find something obvious related to this.

John states that these angels and plagues are the LAST, which strongly supports the view that the Seals, Trumpets, and Bowls are chronological and not concurrent.  It also confirms that the Trumpets, at least, were also wrath.  The Bowls can’t be “last”, if nothing else came before them as “first”.  The Seals, as we have discussed separately, are different in form and while terrible, appear to signify the removal of restraint more than active “wrath”.  Lastly, the fact that the Bowls are “last” confirms that the Day of the Lord is not a single day, but a period of time encompassing at least all the Trumpets as well.

John then sees the angels come out of the heavenly sanctuary:

The Contents of the Bowls

The Bowls are like saucers, with contents that will be hurled upon the earth.  Unlike the somewhat limited nature of the Trumpets, these are more severe and all-encompassing in scope.  Based on their severity, and the unlikelihood of human survival following them, it is likely they occur in a very short period of time near the very end of Daniel’s 70th Week / Day of the Lord.  Here is a brief summary of the wrath from the Bowls:

Harmful and painful sores will literally come upon those who have taken the Mark of the Beast.  These sores will be painful and untreatable.  This bowl reminds me of the sixth plague which God sent upon Egypt in the days of Moses (the plague of boils).  Note that this judgment is specifically upon those who have taken the Mark despite the holy angel’s warning not to do so.  While believers will suffer many things, they will be spared from this act of God’s wrath.

While the second Trumpet judgment affected one third of the sea, the second Bowl will affect the entire sea.  What specifically occurs is not detailed, but it may be similar to the phenomenon of a “red tide” of toxic algae.  This time, all the sea creatures will die.

Similar to the third Trumpet judgment, the third Bowl will affect the freshwater on earth.  Instead of only one third being affected, ALL fresh water will be affected.  Drinking water will be in critically short supply.  John MacArthur, in his book “Because the Time is Near”, explains the interjection of the angel at this point – “God’s judgment of sinners is unquestionably righteous because He is the Holy One.  God is just and holy and will execute vengeance for His people (Romans 12:19, Hebrews 10:30).  Having willfully rejected the knowledge of the truth (Hebrews 10:26), there is nothing left for the unbelieving world but to receive what they deserve, “a terrifying expectation of judgment and the fury of a fire which will consume the adversaries” (Hebrews 10:27)”.  Again, this reminds me of the plagues of Egypt; specifically the first plague where the Nile River was turned to blood.

Again, we are not told HOW this will occur, but somehow the heat from the sun will become unbearable.  Imagine being covered in painful sores, and then getting them sunburned….   Besides extreme discomfort, there may be major ramifications from this heat depending on the duration of it: melting polar ice caps, drought, death of vegetation.  Note that up until now in the book of Revelation, only the Antichrist is mentioned as “blaspheming God”.  Now, humanity joins in.

The kingdom and throne of the Beast are thrown into darkness at this point.  Since the Beast’s rule is global, I see this as being a global judgment like the other Bowls.  This is obviously a supernatural event.  That the sores are still present notes that Bowl 5 will be poured out in reasonably close time proximity to Bowl 1.  Humanity will be in such agony that they gnaw their tongues in torment… yet continue in their blasphemy of God and unrepentance towards Him.

With the outpouring of Bowl 7, the announcement comes that “It is finished”. Note that this bowl is poured out upon the air (atmosphere).  This is when the heavens are shaken, not just the earth.  God is literally shaking the kingdom of satan out of place and is taking hold of the heavens and the earth to possess them for Himself once more.  (For more on the shaking of the heavens, see THIS POST). The earth will be pelted with 100 pound hailstones. The greatest earthquake of all time will resurface the earth in preparation for Jesus’ millennial kingdom; all islands and mountains will disappear.  Jerusalem will be split into 3 parts, and raised up onto a flat plain.    Bowl 7 includes the events of the Destruction of Mystery Babylon, the Second Coming of Christ, as well as the Battle of Armageddon, which are discussed further elsewhere.

As the Bowl Judgments are progressively released upon the earth, we see humanity become harder and harder in their hearts towards God.  Their reactions of fear, terror, and giving glory to God (Seal 6, Revelation 6:15-16, Trumpet 6, Rev 11:13) have given way to cursing and blaspheming God (Bowls 4&7).  By the time Bowl 7 is poured out, all of humanity has chosen a side and will now be judged for whose side they are on – For God, or Against Him.

The Martyrs Under the Altar – Seal 5

The Bible is infallible.  I am not.  Be a Berean – examine the scriptures for yourself to see if these things are so! 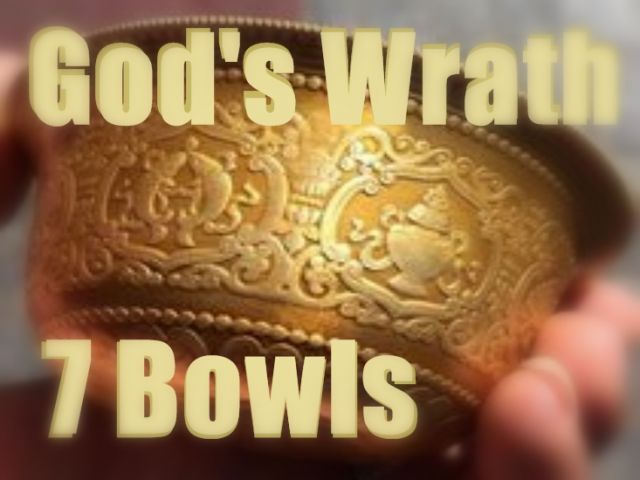